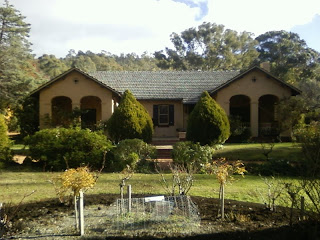 In 1927 a local architect Kenneth Oliphant (1896-1975)(bio here) accepted his first commission for a design in his own company's name and established a service that he continued in Canberra until his retirement in the late 1960's . The Canberra House website has an excellent article about him (here). 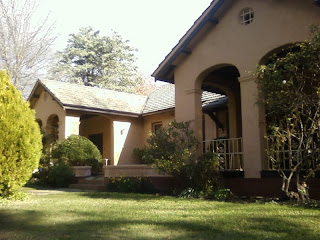 Calthorpes' House was constructed the same year and became Number 24 Mugga Way, Red Hill, Canberra. Harry and Della Calthorpe (1892-1979), two daughters (Dell 8 and Dawn 3) and a maid moved in and the two girls grew up and got married. Harry lived there until he died aged 59 in 1950. Della remained until her death in 1979. 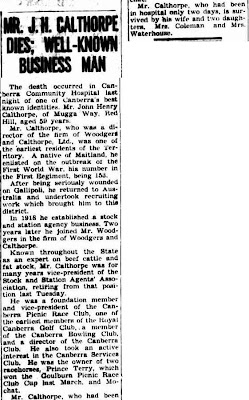 The house is a time machine back to the 1920's. It is furnished with the original carpets, telephone, curtains, Appliances and furniture. Calthorpes' 'castle' would have been featured on the 'Better Homes and Gardens' magazine of the day. The house's interior is 1920's stylish, comfortable, well used and obviously well loved. 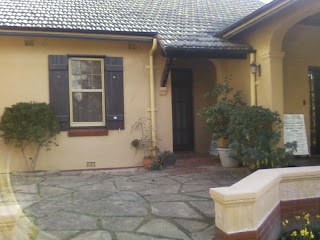 Harry's experiences in Egypt and Gallipoli in World War One are evident in series of photos of his time as a soldier, mementos such as pictures of Harry on a camel in front of the pyramids and the sphinx, a bayonet to stoke the fire and his Gallipoli war medals (private). They say Harry's 'presence' can still be felt in the house.

I imagine that to a Gallipoli veteran the arrival of World War Two, the concern of the imminent invasion by the Japanese Army of mainland Australia and the possible bombing of the National Capital would have been considerable. Calthorpe installed 'blackout blinds' for all of the windows in the house (several remain operational). 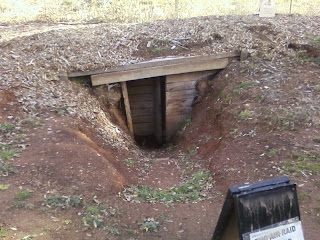 Concerns of potential bombing raids must have escalated as Calthorpe constructed a large timber beamed, earth covered 'bomb shelter' literally in the backyard. The 'bunker' is cut into the side of Red Hill. It has a downward dirt ramped entry and a vertical entry/ventilation opening is located about 5 meters away. 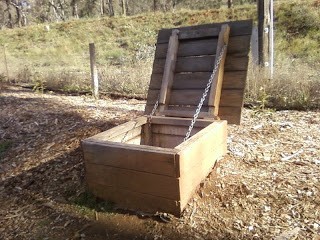 The air-raid shelter is currently being repaired. 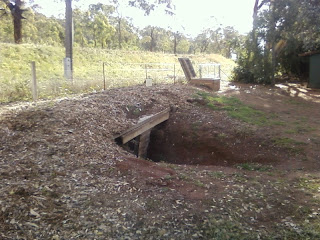 The Calthorpe family remained interested in early Canberra's history and transferred the title of the house to the Commonwealth Government of Australia in 1979. The house has now become a museum and is a building of heritage value to the Australian Capital Territory. The 'Federation era' preserved Calthorpes' House could be described as an Aladdin's cave of domestic history.

Mugga Way property values are now between 2.5 and 4.5 million AUD. The Calthorpes' House brochure from the ACT Government is an excellent read (here)(pdf).