Yarralumla Homestead has quite a history...

In 1859, Murray sold Yarralumla to his brother-in-law, Augustus Onslow Manby Gibbes (1828–1897 ) (family notice board here). That same year, Augustus' parents came to live with him at Yarralumla homestead.

In 1908, the Limestone Plains area, including Yarralumla, was selected as the new Federal Capital of the Commonwealth of Australia. In 1913, the Commonwealth Government purchased Yarralumla. Tenant farmers were allowed to stay on the land on annual leases. Some remained until 1963 when the Molonglo River was dammed to form Lake Burley Griffin. Yarralumla Homestead is now known as "Yarralumla" or "Government House". 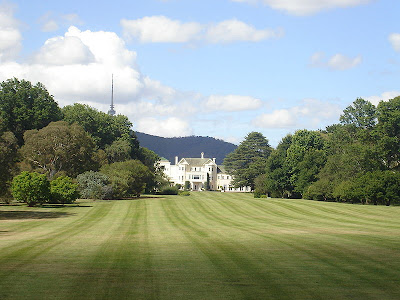 The view up the grass avenue to the 'homestead'...
Photo-Wikimedia commons
View Larger Map
- May 08, 2010