McPherson's grant was disputed by a neighboring landowner Joshua John Moore (1790 - 1864) (bio here). Moore wrote to Robert Hoddle (bio here pdf) the Government Surveyor: 'I beg leave to inform you that I am desirous of retaining the 1,000 acres (404 hectares) already in my possession. It is called and known by the name Canburry.' It was agreed that Moore retain the ridge and the name Canburry for his land, whilst the basin be shared with MacPherson.

The homestead of the property was on the high ground that now forms Springbank Island in modern day Lake Burley Griffin. Springbank Island (if you can get to it) is an island within Lake Burley Griffin named after the 'Springbank Property'. The Island has a jetty at its southern end and barbecue and toilet facilities, shelter, and a few lights at its northern end. The perimeter of the Island is lined with trees. The Island is quite bare. There is a two-burner electric barbecue situated on the western side of the Island.  There is access to fresh water on the Island. Camping on the Island is not permitted. 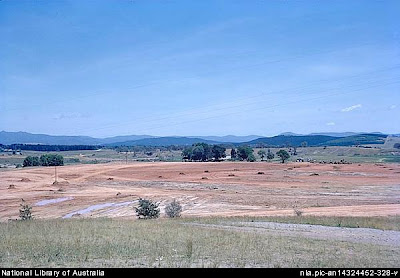