A little known fact is that Canberra is built on the top of numerous limestone caves...

In 1821 Charles Throsby (1777 - 1828) (bio here) whilst exploring described a region with ‘very fine limestone, in quantities perfectly inexhaustible’. By 1822 this description reflected the name given, the 'Limestone Plains' (present day Canberra). The Plains were dotted with outcrops of limestone and the (later) site of Canberra was described as 'largely treeless and even small limestone outcrops and water filled sinkholes were conspicuous in the landscape'.

Much of the limestone is rich in fossils and important specimens were collected in the 1870's yielding a rich fauna of corals, shells, bryozoans, crinoids and trilobites. These were the first record of Silurian fossils found in Australia. Of particular note are sites at Woolshed Creek, Mount Majura, Red Hill and Jerrabomberra Creek.

Limestone caves in the ACT are found on the plain now occupied by the city area and along the Murrumbidgee and lower Molonglo Rivers. Caves are also found on the Paddys River called the 'Cotter Caves'. Near Burra NSW lies the 'London Bridge' and associated caves. These, and another karst (a karst is a distinctive topography in which the landscape is largely shaped by the dissolving action of water on carbonate bedrock usually limestone, dolomite, or marble) on the Queanbeyan River in NSW is known as 'White Rocks'.

The site for Canberra was called the Limestone Plains because it is enclosed by hills to the south, east, and west and had limestone caves under the surface. There are many caves, caverns and sink holes under central Canberra and a number of karst areas and limestone outcrops exist within a thirty kilometer radius of Canberra City.  Features are present ranging from sinkholes, vertical shafts, disappearing streams, and springs, to complex underground drainage systems and caves. (Most of our karsts were drowned or buried to provide the Nation with a showpiece capital city.)

The cavernous nature of some of the karsts is well-documented. An early record was lodged about the Limestone Plains Cave with a note added ‘contains lake’. This cave was used for some time as a rubbish tip. (in 1963 the new lake was filled and the cave now lies submerged under Lake Burley Griffin.)  Many other caves were discovered as the city developed.

So much cavernous limestone was encountered while the city’s main outfall sewer (here) was being constructed in the 1920s from the Hotel Canberra to Weston Creek that the foreman in charge of driving the tunnel declared his belief 'that the proposed lake  (Lake Burley Griffin) would never be able to hold water'. Foundation excavations and geological investigations for major buildings and structures from the 1950s to the 1970s confirmed the presence of cavernous limestones beneath central Canberra.

When construction began on the Treasury Building in the 1960s, extensive caves were uncovered below the site. These extend from eight to thirty-six metres below the surface through a richly fossiliferous limestone layer that is over fifty metres deep. The discovery of caves under the whole site led to some extensive alterations to foundation design, and some piers had to be founded within the limestone at depths of twenty to thirty metres below excavated rock surface - in some cases well in excess of the building’s height. The caves also posed a problem for de-watering the building site; even pumping at 180,000 litres per hour made little impression on water levels.

Historical note: The London Bridge limestone is situated in NSW on Burra Creek, a tributary of the Queanbeyan River, about thirty kilometers south-east of Canberra City. The site was first described in the journal of Captain Mark Currie, RN, describing his 1823 exploration, in which he discovered the Monaro Plains (here). On his return journey Currie was shown the Bridge by local Aborigines. He described it as ‘a natural bridge of one perfect Saxon arch, under which the water passed', but he made no mention of any caves. 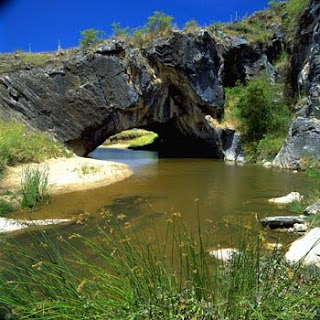 The area received some notoriety through the ‘London Bridge mystery’ with the discovery in 1875 of human (supposedly European) bones in a small cave near Burra, leading to an inconclusive coronial inquest and rumours of murders committed by bushrangers. Another story, seemingly unrelated, reports the discovery in 1874 of `a veritable catacomb’ containing `many hundreds of human bones and skulls, centuries old’. These were carried away by the bagful and pronounced by three surgeons, including the Coroner, to be `the skeletons of the Aborigines of former times’. It has been widely believed that such Aboriginal cave burials are rare in the region but more recent analysis suggests that caves were used for burials.. 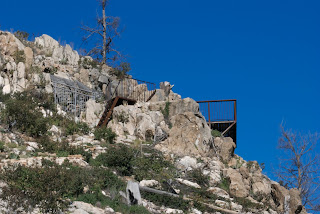