A short drive beyond Point Hut Crossing next to the suburb of Gordon is Lambrigg. Lambrigg was built in 1894 by the internationally famous wheat experimentalist William Farrer (1845 - 1906) (bio here) for his wife Nina de Salis. Here was Farrer's scientific laboratory. His experiments were described at one time as "pocket handkerchief wheat plots".

Farrer's cross-bred varieties grown beside the Murrumbidgee River rescued wheat from the world-wide collapse caused by rust. Farrer continued his work until his death, of heart disease, on 16 April 1906. He and his wife (d. 20 February 1929) are buried on the hilltop behind their house at Lambrigg. The grave is now marked with a granite column, erected by the Commonwealth Government and unveiled on 16 January 1939. 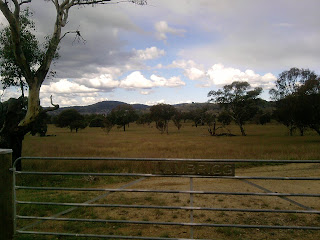 A view from the front gate back towards the crossing.

A good read about Lambrigg and Farrer here