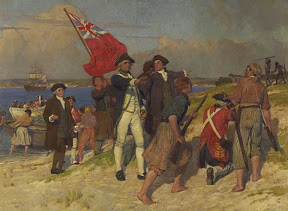 Unfortunately this important period in Australia's history is not very well known. There seems a vague acknowledgement that there may have been some distasteful encounters between settlers and Australia's First Peoples. But there is a complete disregard for a period of rolling conflict all over the country extending over 150 years.

This 1997 documentary impressed me some years ago. Referencing personal journals from the period it relates first hand accounts and documents to weave the story of our unspoken history of European invasion and the resistance by successive tribes all over the country as the arriving colonies expanded.

I'm an advocate of Historical truth. I actually believe that acknowledgement of an accurate chronology is essential in forming an honest national identity and the first sincere step toward Indigenous reconciliation.

This documentary runs for two and a half hours, is divided into time periods and historical characters are played by actors.

We should learn from history not brush it under the carpet. I'm hoping if you take the time to watch this film that it may open a window to understanding the collective consciousness of a people still struggling for recognition.