One of the things about Canberra that puzzles me is the apparent memory loss of the near century of occupation before Lady Denman proclaimed Canberra as Australia's new national capital in 1913.

We have just finished a year long celebration of Canberra's first hundred years as a capital city but it may interest people to know in regard to the area's discovery we are approaching our historical second centenary. 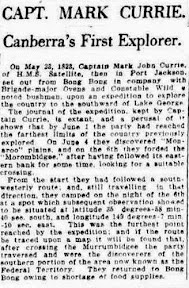 So just food for thought. May 23, 2023 marks 200 years since Canberra's official discovery.

Having said all that it is also noted that : "The first Europeans into the area were Joseph Wild, James Vaughan and Charles Throsby Smith who discovered the Limestone Plains upon which modern day Canberra is sited. The following year Dr Charles Throsby reached Tuggeranong and two years later (1823) Joshua Moore's Canberry station was established."

In fact I think the latter true of North Canberra and Curry the expedition of the south where he first discovered the Murrumbidgee River, allegedly around today's Pine Island. South Canberra then on to the Monaro.

1823 seems the date to aim for for a bicentenary though be it discovery of the south or first official settlement... Regardless 7, 8 or 9 years is probably a bit early to plan a celebration.