An interesting recent Canberra Times article mentioning the protests by Canberrans to successfully prevent the destruction of the building last century. Blundell's cottage - Built in history, nestled in time. 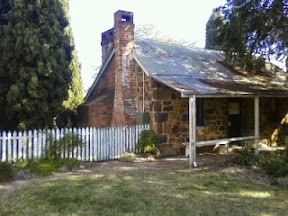 "This small stone cottage was built about 1860 as a home for workers on the Duntroon Estate. The stone is the same as that used in St John's Church and Schoolhouse, locally quarried from Black Mountain and Mount Ainslie. A number of families lived in the cottage over the hundred years it was occupied. Located on the shores of Lake Burley Griffin in Canberra, the cottage is historically significant as the structure dates back to 1860 and is perhaps the last remaining building of that time along the banks of what is now Lake Burley Griffin but what was once the Molonglo River.

The cottage was part of the 32,000 acre Duntroon Estate owned by Robert Campbell (1769 - 1846) (bio here).Ploughman William Ginn and his family were the first to live in the farmhouse they departed ten years later moving to their own selection. The cottage gained it's name from share farmer George Blundell and his wife Flora, (the second occupants) who lived in the cottage from 1874 until George's death in 1933."