Tidbinbilla Nature Reserve abounds with Lyrebirds. They breed in the deep of winter. The males display their distinctive feathered tails and sing for mates. The Lyrebird is a ground dwelling bird with a unique call and ability to mimic other birds in its environment. In fact this amazing mimicking ability can extend to other domestic noises. I have heard recordings with lawnmower and chainsaw starter pulls from a bird in a south coast wildlife park.

Tidbinbilla of course lives up to its name as a nature reserve. The area I have been recording in the past few months consists of a natural gap between two hills about 6 km above the Rock Valley Homestead. The gap sits above an unnamed gully which in wet weather would be a tributary of the Tidbinbilla River. This is the scene. I have always liked the name of this gap probably named in the 19th century, ‘Devil’s Gap’.

I set a camera and 2 recorders’ last Monday and left them there until today. As luck would have it all the necessary ingredients for a decent wildlife recording were present mid morning on Wednesday. No wind or foliage noise… no aircraft droning and a bird in full extended chorus prepared to virtually perform into the microphone…


This is a 5 minute recording of a Tidbinbilla Lyrebird in full song.

Just as an historical curiosity to perhaps read while listening the lyrebird was also considered a table bird and were hunted like pheasant. This old article is about hunting the Lyrebird and I suspect it was set just east of Queanbeyan. Its a gripping tale... 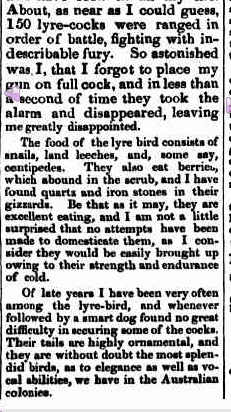