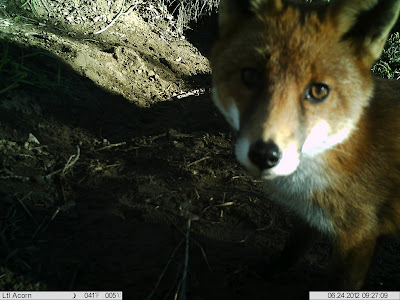 A remote camera photographed this little feral fox last year on the Murrumbidgee River at Tharwa. I was staking out a large wombat burrow for a few weeks and discovered a definite interaction with foxes and the burrow. Interestingly in the past few years a fox has been the only animal that seemed to have detected or paid any attention to the cameras presence. They are very smart.

My interest in foxes though is spiked by the plight of our vulnerable fauna. It is a sad reality though that eradication is impossible. Every winter in the 70s and 80s we shot hundreds. Not just us but many others. A pelt in those days from the Queanbeyan skin buyer brought between $16 and $40. Then the anti-fur advocates ended the demand for feral fox skins. Every year I commented that we must be knocking the population around and every year the stats stayed static. 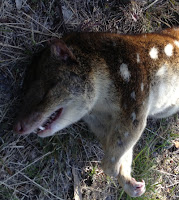 After the June Quoll road kill on Isabella Drive in Tuggeranong. I have been setting remote cameras in suitable selected areas. Looking at those areas the greatest threat to a quoll population would be foxes. I found a 50 year old study of the stomach contents of foxes in the Canberra District. Not exactly fresh research but I can only assume that the dietary habits of foxes haven’t changed much in the past half century.

The stomach contents of 267 foxes from the Canberra District and 111 foxes from other localities, mainly in southern New South Wales, were examined. In the two years covered by the survey an additional 31 stomachs, 7.6 % of the total number, were found to be completely empty. The staple foods of the fox were sheep, mainly as carrion, and rabbit. Invertebrates, mainly insects of great taxonomic diversity, made up a large proportion of the diet during the warmer months. Birds and cold-blooded vertebrates did not figure prominently in the diet of the fox. The fox is an opportunist predator and scavenger utilizing foods which are abundant and easily obtainable at any particular time.

Very rare... Quolls seem to turn up in Canberra’s suburbs every few years as either a sighting in, or a road kill near, one of Canberra’s nature park network. Charnwood 2008, Oakey Hill near Lyons 2012 and recently near Fadden Pines in Gowrie. In all these environments the only competition species are the fox, dog, and cat with the later being both feral and roaming domestic.

I suspect most of the pictures and videos I capture will be of those local competitors as I’m using small meat baits. Not enough to feed a feral animal but enough to attract a quoll. I've had to put a bit of thought into the placement of these cameras in the Nature Park environment. I'm used to photographing in remote locations in Namadgi where the likelihood of anyone coming across the camera is virtually non existent. Anyway… the chances we take.

Quolls breed at this time of the year. It is when they are most socially active with males roaming much larger areas than their female counterparts’ territories mating multiple times. Gestation is about 21 days for a litter of 4 to 6 and the male has no part in raising offspring. Most other times of the year they are mostly solitary.

The beauty of these cameras is you set them, walk away and get on with life so we’ll see how we go over the next few weeks. I may be lucky enough to capture something if my assumptions of corridor travel are correct. If not we will have a small study on the feral animals of the Nature Park and nearby burbs.