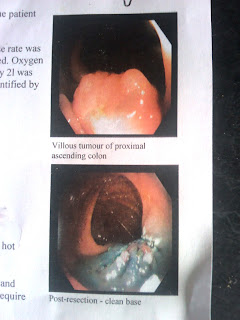 I called this post ‘Secret men’s business' as a reminder to men to have regular health checks. This post also might seem a bit clinical but I think it shows the results of neglect which in some ways I think equates to incompetence.

The story simply reads that 10 years ago after some minor bowel symptoms was sent off for a colonoscopy. At that time a couple of small polyps were discovered and removed. All good. I was then warned to have regular colonoscopies… Nip them in the bud so to speak.

(The post’s point) I didn't have regular check ups and the story continues 10 years later… Symptoms again that could easily be ignored but this time the blood results came back as showing elevated cancer markers. Again off for a long delayed colonoscopy but this time with an added endoscopy. Results… one 10mm pedunculated polyp, one 7mm pedunculated polyp, one 40mm villous tumour and a large polypoid tumour removed in 3 pieces… All off for biopsy and all because of missing regular check ups.

I'll find out if my neglect has the potential to kill me early next week. So an example of what can go wrong for middle aged men who think 'it will never happen to me' or who ignore minor symptoms. I urge you to have regular medical checkups. We are not as tough as we think we are.

Email ThisBlogThis!Share to TwitterShare to FacebookShare to Pinterest
Labels: health