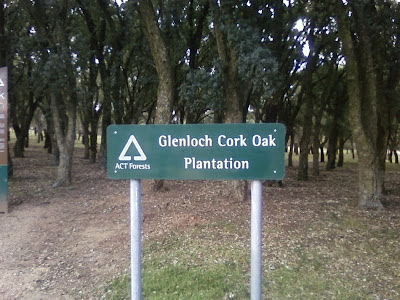 Canberra owns the Southern Hemisphere's oldest operational Cork Oak plantation. Apparently when Walter Burley Griffin planned Canberra he allowed for a cork plantation. In fact he imported seeds that were nurtured by Thomas Weston at the Government nursery that were supposed to become the foundations for a cork industry in a self supporting capital... 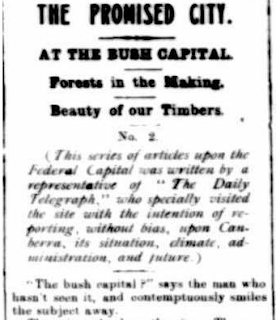 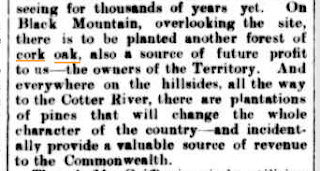 National Library of Australia (full article)
It seems by 1935 they would have been around 3 feet tall... (1 metre)
The Sydney Morning Herald - Friday 18 January 1935 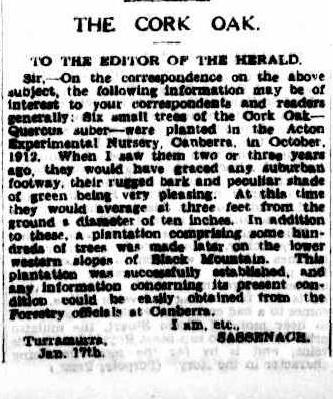 National Library of Australia
It was first harvested in 1948 but had many years to develop before becoming a viable commercial plantation... 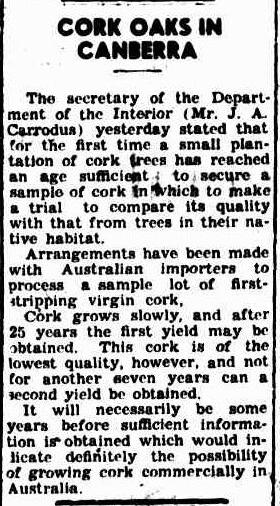 Apparently also the ACT National Trust has declared the plantation at risk in its 2012 @risk Release. I find it disturbing the government may want to cut a road through it in their development of the new National Arboretum...

Make of that what you will. What may slip from a communities grasp forever is an intact living representation of Walter Burley Griffin's vision. Removing young (they live 500 years) 90 year old Cork Oaks would alter the integrity of a resource that both makes money, could go on for 500 years, is historically important for a city's heritage, and was an ideal of the National Capital's designers.

Email ThisBlogThis!Share to TwitterShare to FacebookShare to Pinterest
Labels: heritage