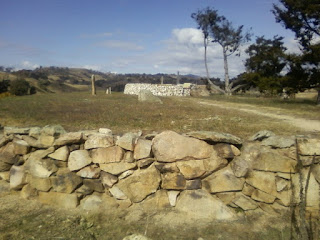 A little background first... the De Salis family cemetery or Cuppacumbalong cemetery is a 19th century raised mound cemetery of a unique design. It is located at the junction of the Gudgenby and Murrumbidgee Rivers near Tharwa Village and was once the favourite spot to sit and ponder of Rudolph De Salis. It was here the family decided to bury him when he passed on but the ground was of a type that made it very difficult to dig a grave of any depth. Apparently it took nearly two days.

Add to this the whims of two flooding rivers and three of the early burials at the location were simply washed away. Not to be deterred Rudolph's mother Charlotte thought of a unique way of preventing washouts and making the digging of graves an easier task.

In 1878 stones was carted from nearby Mount Tennent by horse and cart to build an oval retaining wall that was then backfilled with earth to raise the cemetery well above the flood line. This served the purpose well and the cemetery became the resting place of many who worked and lived on the Cuppacumbalong Holdings.

The cemetery is the oldest rural cemetery in the ACT and being a short walk from the new Bbq area located underneath the recently refurbished Tharwa Bridge is readily accessible to the public. It also has informative signage along the walk past Cuppacumbalong Homestead and at the cemetery.

Unfortunately in the Canberra floods of 2010 two sections of wall collapsed after succumbing to the backlog of water being retained within the mound. Sections of the wall simply fell into a jumbled pile of fieldstone. The floods were a major infrastructure setback for TAMS and the cemetery was added to a very long list of repairs within the Territory. 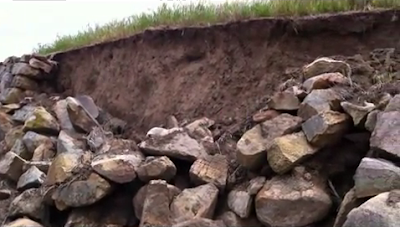 Today I was lucky enough to hear about the progress of the repair project. I met with Brett McNamara, Simon Katz, the project manager, and Philip Leeson the heritage consultant overseeing those values and was privy to the workings of what will be a remarkable endeavour. Put simply the site is very old, very complex and a workable solution to re-raising the largest section of collapse could take the implementation of one of a few different methods.
I won't try and repeat Phillip's excellent explanations of the different engineering methods but can confirm they will be decided upon during the progress of the work as the situation necessitates. The methods deal with reinforcing the mound and footings before being re-clad in as much of the original materials as possible. 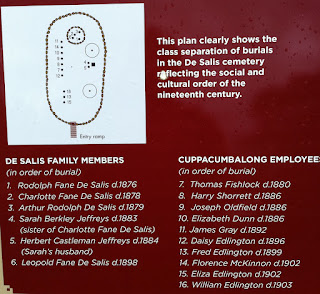 I have discovered that extensive behind-the-scenes work has been undertaken to maintain the heritage values of the site and that this took time to be thorough. In order to repair the main fallen section a portion of the mound will have to be removed so the locations of the burials first needed to be ascertained so as not to disturb them. This was done with ground radar and the results are at this time being interpreted. To this point I suppose nobody accurately knew where the graves are located or if there where more internments not recorded. There are only scattered headstones to mark them. 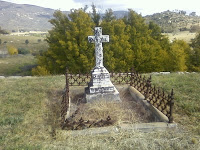 It's now all very exciting though. The heritage issues have been resolved... a plan formulated and contractors secured which was no easy task because this is a unique, one-of-a-kind project. It will be an interesting addition to the companies resume that's for sure.

Then it comes to the challenges of construction. Physically the site is also demanding and restrictive. All the stones are of a size where they cannot be man-handled into position so each stone will have to be lifted and replaced with a mechanical aid. The 'platform' of the mound is too unstable to support heavy machinery so all work has to be completed from below where there is a steep slope. 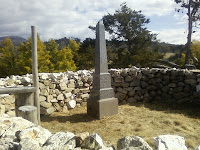 The site sits directly overlooking the Gudgenby Murrumbidgee convergence. The main fallen section is the tallest section at several metres and it abuts to the downhill slope towards the Gudgenby. Because of this work platforms will need to be constructed below the wall as a base for workers. It actually leaves me pondering just how hard of work it must have been for the settlers without any of today's technology.

Brett also mentioned the emphasise that will be placed in ACT heritage assets at next years 100th birthday celebrations and the refurbished DeSalis cemetery will of course be a part of that.
That's about all I could soak up before the drizzling rain at the cemetery soaked the four of us but the plan all sounded very well thought out.and the challenges of the project are appreciated. I should have mentioned this to them when I was there but I do hope TAMS document the reconstruction on video.
This is some video I took there in 2010
Dave
View Larger Map
-
- May 24, 2012