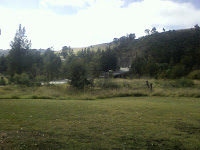 Just because I thought it was interesting 30 years of random reports from the Uriarra District of the ACT and bordering NSW. Originally known as Urayarra I think these snippets of information tell a story for the next time your out past Tidbinbilla and Uriarra...

What caught my eye at first to these at first rural reports was an early report of rabbits arriving in the district. Rabbits once introduced to Australia became a nationally enormous problem for the economy and rabbits were to be an ongoing problem for the ACT community. Then following along through the years a picture emerged of a lovely little community with is ups and downs and people... 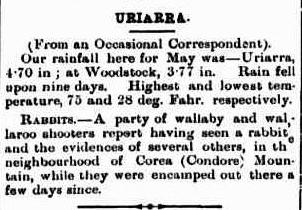 
At the time the Uriarra community appeared to be a thriving and happy one...
Queanbeyan Age - Wednesday 5 June 1895


We now seem to enter the boring years of rural reporting focusing more on agricultural statistics than community affairs. Probably more an indication of reporting style of the era than anything from what I gather...
Queanbeyan Age - Wednesday 5 November 1902 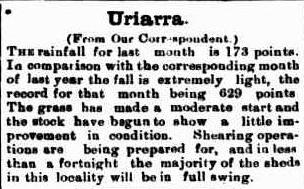 
Canberra starts its interests and as a side note 'The Age' seems to emerge with the approach of the new capital...
The Age (Queanbeyan) - Tuesday 30 July 1907 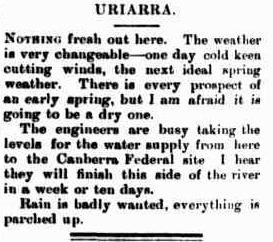 
About this time Federal matters truly come to hand...
The Mercury - Monday 29 July 1912 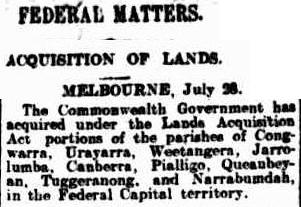 
Three years after Canberra's birth the Great War. I haven't looked to see if the Urayarra soldiers made it back. Meanwhile in Queanbeyan 'The Age' apparently returns and joins the Observer...
Queanbeyan Age and Queanbeyan Observer - Friday 25 August 1916


A quiet life continues albeit with some stock losses...
Queanbeyan Age and Queanbeyan Observer - Tuesday 4 December 1917 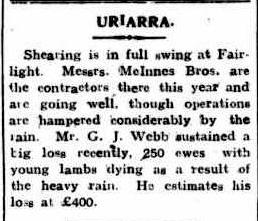 
The loss of a bridge...
Queanbeyan Age and Queanbeyan Observer - Tuesday 14 November 1922 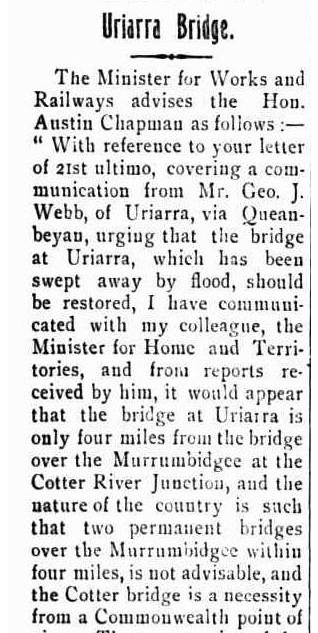 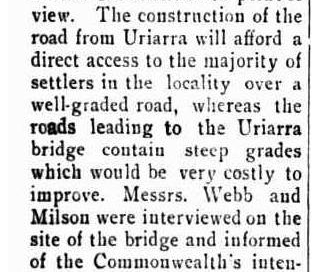 
Still no bridge and a skirmish over a river punt...
Queanbeyan Age and Queanbeyan Observer - Friday 14 December 1923 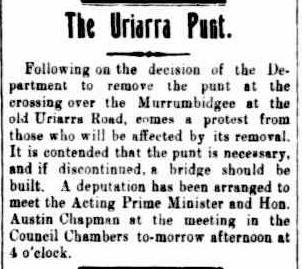 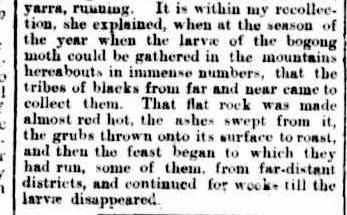 National Library of Australia
More recent than the original rural holdings a Uriarra settlement exists to today and was recognised as such from the 1920's but the community as is illustrated by these clippings I think was older than that. I have a post on the Uriarra Gold Rush of 1895 that I found interesting too. Today's Uriarra settlement was dealt a savage blow in the 2003 Canberra fire storm and the Wikipedia article is an interesting read.
--------

Anyway they gave me a sense of what life at Urayarra was like a century ago.