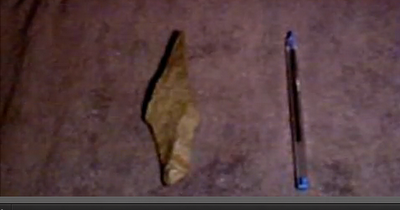 Its was raining today and I took a few minutes to video a stone I found recently on a spur above the high water line of the Murrumbidgee river behind Bonython. I have found Aboriginal stone tools in that general  area before (hence an occasional walking spot for me) and think this stone might be one too although it is unusual. 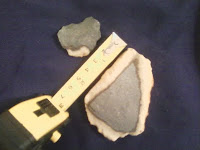 I have a fair idea of what I am looking for and was lucky enough to find one whilst walking with Peter Dowling on a walk of the northern ACT zig-zag border who confirmed, to me at least, that I knew what I was looking at. I think once you have seen a knapped stone or chip they stand out somewhat.

I have posts on ACT Aboriginal stone tools: - Symonston Aboriginal quarry (where I think this stone possibly came from) and Tidbinbilla stone artefacts photos of the displays at Tidbinbilla (with a great picture of a knapped stone). The photo above is of stone from the Symonston Quarry (left there).

A stone spear tip? a cutting tool? or just a natural formation? this video is just my pondering about what may or may not be an Aboriginal artefact...


Map of area where stone was found...