LAMBRIGG - THE ESTATE OF W.J. FARRER

Just out on the Tidbinbilla Road not far from Tharwa is an historic property that was the base for research that effectively saved Australia's wheat industry at the end of the 19th century. The new strains developed there effectively increased the World's wheat production.

The article describes the homestead, Farrer's laboratory, his interest in developing the Eden-Monaro region as the location for Australia's new national capital and a brief biography of his life...

National Library of Australia
William and his wife are buried on a hill at Lambrigg and a memorial was erected. Lambrigg is a working property today and the memorial is closed to the public... 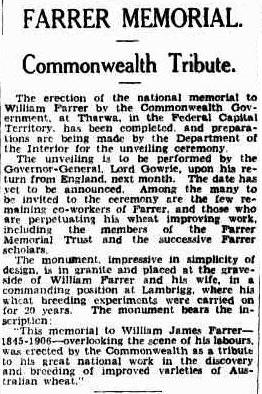