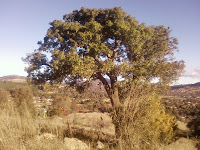 Canberra is I think very lucky in that most people are in walking distance, if not a short drive, from a nature reserve. Most allow dogs on a leash and I travel to a variety within a short distance of my home in order to do just that. One small oasis of nature not far from home is a small knoll called Simpson's Hill...

I'm not sure if it is a part of the Canberra Nature Park but if  it is, it is somehow a forgotten part if the noxious weeds allowed to flourish are to go by. 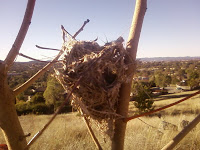 Wikipedia under it's Suburb of Chisholm entry describes Simpson's Hill in the suburbs of Canberra thus:

"Chisholm and Gilmore are separated by Simpson's Hill, which provides some wilderness with walking tracks over it, popular for walking dogs."

That appears to be the only information I can find on the Internet about this little Canberra remnant of native habitat.

The summit seems the home of birds, a few eucalyptus and an old kurrajong tree. The kurrajong's sturdy limbs support some local children's rope swing and the slope below is covered thick and high with grasses interspersed by natives and stray exotics alike. A few tracks into the grass, probably by animals, but apart from that I don't think many wander off the path very often. 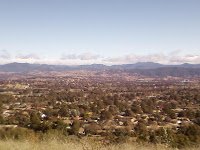 Drawn to the hill fairly regularly because of the dog and it's proximity, the hill offers a pretty special surprise in the view offered after the very easy walk to the top. An amazing panorama of western Tuggeranong, the Bullen Range and the Brindabella Mountains suddenly appears to the west of Canberra.

For anyone reading not from the Capital Canberra has a remarkable natural backdrop of National Park affectionately called the 'Brindies'. My phone camera certainly doesn't do the view justice. 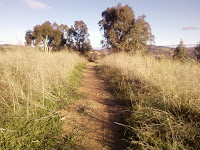 The hill sits like an island in the suburbs separated from the mainland of Canberra's hilly western border. A unique little patch of remnant hill grassland left to regeneration since it's surrounding suburbs were built in 1985.

Before this time the area was a part of the Tuggeranong station and had been grazed consistently since the 1840's. Still prominent are blackberry bushes and other exotics and general weeds that have escaped from neighbouring suburbia.

I am actually surprised in the preceding 30 years no-one had thought to care for the 'reserve'. This area certainly needs a little love by removing everything noxious and replanting and perhaps nurturing what was there before suburbia started it's crawl. 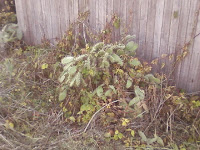 .A point in example: the picture to the right is of a suburban wooden-paling fence line bordering the reserve and evidently something exotic steadily radiating out from it's source.

Along the fence's length were clusters of what looked suspiciously like Prickly Pear I could be wrong but even if it isn't I'm sure whatever it is shouldn't be allowed to creep into the reserve.

Perhaps someone local to the area reading this might have the time to pursue the regeneration of this parcel of hill. I know the Southern ACT Catchment group supports people willing to undertake these sort of projects. 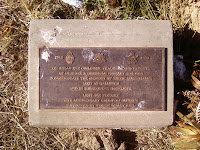 Quite surprisingly another point of interest on Simpson's hill is on the eastern side where the local Gilmore Primary school has its ANZAC memorial. As the plaque states the children

"...gather on the eve of ANZAC day to commemorate the memory of those lost at Gallipoli and in subsequent conflicts".

There is a white flagpole and the remnants of wreaths and flowers from their last commemoration.

The hill is very quite during the week when you will probably find you have the whole area to yourself. All up an interesting place to walk the dog with a few park benches located at the summit to drink in the amazing view of the Brindabellas... 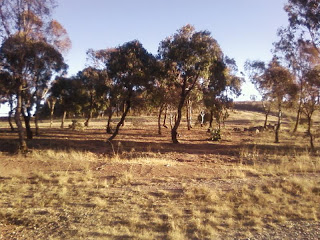