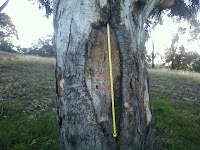 This photo is of a gum tree that grows at the end of my childhood street in Canberra. It's an old tree and not all that different from any other of it's species on the slopes of Mount Taylor however this tree is significant.

Not because it was a tree we climbed and built tree houses in as children but that (as I found out later in life) it had been scarred by the original Aboriginal people of the region prior to or only shortly after European discovery in 1822.

The scars were produced by skillfully cutting the desired shape with an axe (stone and after settlement steel) and stripping the bark from the tree in a sheet to be fashioned into what we would refer to as either a Coolomon or Wira (vessel or a container) or sheilds, canoes, baby carriers and, I am sure, many other general use items produced by the practice. Once the bark was removed the living 'heartwood' of the tree died leaving the enduring scar on an otherwise completely healthy tree that remains today. Depending on the lifespan of the tree Aboriginal scars can be hundreds of years old.

Because I found this new knowledge interesting I devoured the limited information available about scarred trees (identification manuals here and here) and realising that I had seen many of these trees in the ACT over the years decided last year to track as many down from memory as I could. A little Googling and the publicly 'known' trees were at Westridge in the Diplomatic district and south suburban Wanniassa with it's excellent examples of canoe trees and others. Historic Lanyon has trees I could not access and there are others identified at Pialligo and Majura also inaccessible.

I then remembered the ones from the past seemingly unknown and in far better condition than the unfortunately termite affected trees of Westridge. The childhood one in Pearce, a ghostly gum on the slopes of Red Hill and one I subsequently noticed on the Parkway in Kambah. I have been told others have been identified from Kambah to the Murrumbidgee river and it is obvious we have a numerous, rich and 'tangible' collection of living artifacts linking Aboriginal heritage to today.

I am by no means now claiming to be an expert but after seeing a lot of examples and learning to identify what is NOT a scarred tree (branch fall injury, fire damage, stock rubbing etc.) 'blind freddy' could identify one. It amazes me that the existence of these living artifacts is not more widely known and I have published the information on the trees in the ACT that I have discovered. Because of this I am occasionally contacted by people to help them identify trees in their communities that they have discovered. Some are, some are not. Last night I received an email from South Australia asking...

I don't live in the ACT (I'm in SA) but was wandering around where I work today and came across this tree (attached). So is it what I think it is? Maybe a coolamon tree? It's in an area where most people won't go....on private property next to a fire track in Charleston, SA (a rural area ) My boss wasn't aware of it either.

Went to do some google searching about aboriginal trees and came across your website (great site by the way).....I knew about canoe trees (there's quite a few around the river down here) but wasn't sure what these were called till I found your site....that is, if it is one of these trees.....doesn't look like it occurred naturally however.

It is quite a ways up the tree...and didn't see any lower branches where someone could have easy access, but was thinking that if it was done a while ago, it may not have been that high up back then maybe? (due to the tree being younger?)

So do you think that's what it is?  Kind regards, Jules 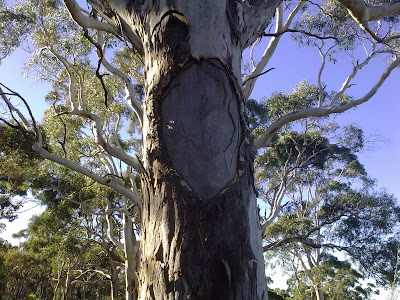 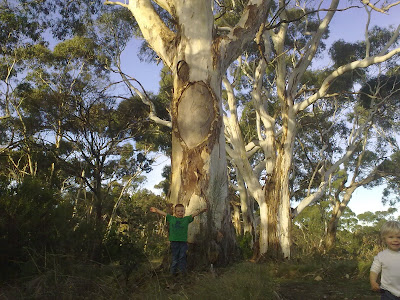 If it was at ground level I would have dismissed it as a probable cattle rubbing however it is too high for that The shape is consistent with aboriginal scarring and unless there are visible "hatchet marks' would have been cut with a stone axe and probably pre-dates European settlement of the area.

I would be contacting your local heritage body and reporting the tree for formal identification. In my opinion it is probably an extremely significant find in terms of surviving Aboriginal heritage and appears in very good condition. It seems to conform to all requirements of a coolomon but it is so big! I have seen much smaller scars high on trees before and wondered how the craftsmen worked so high up but they obviously had some method. I am thinking more of a shield? perhaps?

And I am very interested... I think the South Oz community that has this heritage asset are very fortunate and hope they appreciate it still existing with so many lost to bushfire, age and past land clearing practices. I also hope that somebody 'qualified' to identify these remarkable relics does so and gives the tree the protection that it's heritage value warrants.