Some interesting facts about this famous Australian explorer and his beginnings as a teenage grazier on the Limestone Plains of present day Canberra. 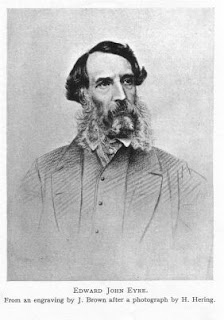 Grazier, explorer and eventual Colonial Governor of Jamaica Edward John Eyre (1815 – 1901)(bio) arrived in Australia from England in 1833 and that year established himself as a grazier a month before his eighteenth birthday when he bought 400 lambs and took up 1260 acres (510 ha) of land at Molonglo Plains, near Queanbeyan (info). The following year in partnership with Robert Campbell (bio) of the Duntroon Estate (post) he drove 1,000 sheep and 600 head of cattle overland to Adelaide and pocketed a tidy profit.

It was with this money that Eyre financed his exploration of the interior of South Australia with two expeditions to the north towards the Flinders Ranges and west past Ceduna. Eyre was the first European to explore the length of the Great Australian Bight and the Nullarbor Plain by land in 1840-1841 finally reaching Albany, Western Australia.

Sadly on his expedition with John Baxter (see Eyre bio) and three Aboriginals, two killed Baxter and left with most of the supplies. Eyre and Wylie were only barely surviving when they sighted and attracted a French whaling ship at Rossiter Bay (named by Eyre after the captain). Eyre survives to tell his tale and goes on to become a Colonial Governer.

Info on his expeditions (here)

The following video from The National Library references Eyre and his Aboriginal party member "Wylie", how they and other explorers found their routes into the unknown interior of Australia and the problems they faced on their expeditions:


Quite a career from humble beginnings...