The Tidbinbilla Tracking Station is a major link in NASA's (info) Deep Space Network. The antennae complex has played a large role in nearly all of NASA's lunar and planetary probes since the mid 1960's. Below is a link to a British Pathe newsreel of the 1965 opening of the tracking station in the Australian Capital Territory. 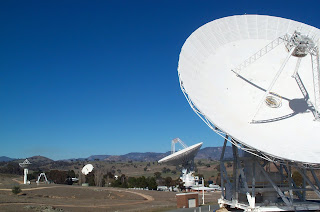 The black & white newsreel shows the Prime Minister of the day Sir Robert Menzies (1894-1978)(bio) opening the state-of-the-art facility in the Tidbinbilla Valley south west of Canberra City, inside the control room of the tracking station with engineers busy at their consoles and of course the antennae itself...