Squatting (info) south of the Murrumbidgee River first began around 1830 and Rock Valley near the Tidbinbilla River was first occupied by a squatter, George Webb. In 1885 George Green purchased a portion of the Tidbinbilla Valley and by 1895 had built a pise' (info) house and planted an orchard of 74 fruit trees.

Green became renowned as a pise' builder and constructed many buildings in the region including in 1900 a farm structure with a loft for his Rock Valley property. In 1905 the pise' homestead was enlarged and in 1915 a granary was constructed. Following his death Thomas and Mary Green took possession and following their deaths in 1958-9 Rock Valley was subdivided. The Tidbinbilla Nature reserve was declared in 1959 and the homestead and remaining property was bought by Mrs. Newsom of Norfolk Island. 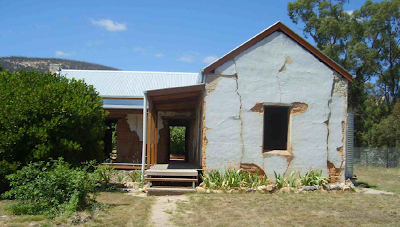 From the presentation for the Canberra Archaeological Society Workshop July 2010 by Juliet Ramsay:
The Revival of Rock Valley is a very comprehensive report that tells the story, and highlights the heritage values, of the Rock Valley property with pictures, diagrams, plans and informative text.

UPDATE - There is a video of the homestead with history (here)