As a teenager in Canberra in the 1970's I was involved with the Duke of Edinburgh awards (info) and we attained part of our levels of awards with hiking, compass work, survival skills, shooting etc. These skills were extremely useful when I joined the army in 1980. An old Marist Brother, Kevin Hurlihy would fire up the 3 ton Toyota Dyna Diesel fitted with a troop carrier pantech and load up 20 students and off we would go on shooting trips to locations like Booligal, Bourke and Lightning Ridge. 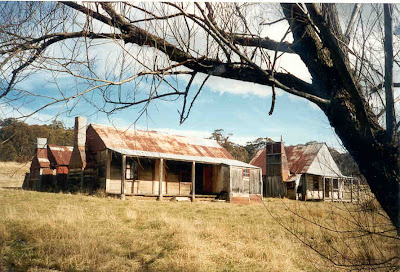 Coolamine Huts - Northern Kosciuszko - Image KHA (here)
Weekends often saw us hiking the Long Plain and camping in the old stockman's huts that used to support the 'high country' grazing on the plains. The huts were a reliable safe haven from the changing elements and a base to explore the natural features like caves, creeks, trails and nearby huts. We highly appreciated the heritage of the structures and acquired memories that would last a lifetime whilst temporarily inhabiting them. We even endeavoured to maintain the structures so they would remain viable for others use in either an emergency or for pleasure. 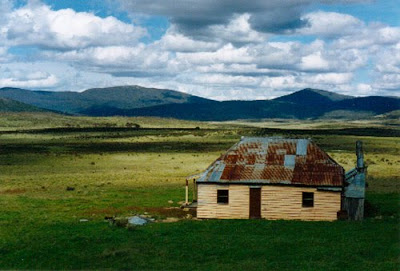 Old Currango - Northern Kosciuszko - Image KHA (here)
I have to admit that our efforts only extended to taking up sheets of tin and nailing them over area's that needed attention however we always made sure there was wood and kindling, matches and tinned food left behind for the next person who may be there out of need not choice.

Today by the tremendous unpaid efforts of volunteers from a number of organisations the huts (less those lost in the 2003 Canberra bushfires) are being restored to their former glory. The following video from filmmaker Richard Snashall discusses the huts near Canberra...