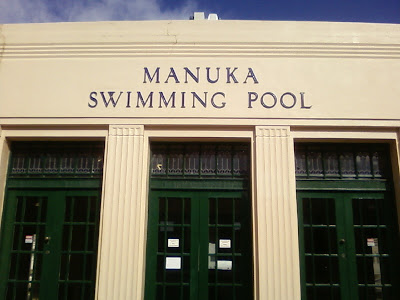 Canberra is known to experience extremely hot summers and a swim in one of the rivers in Canberra was the only available form of relief on a scorching summer's day in 1920's Canberra until 1929 when the Minister of Home Affairs, the Honorable Arthur Blakeley (1886-1972)(bio), proposed establishing a public bath. The proposal opened the doors to establishing both a social venue and the competitive sport of swimming to the new city of Canberra. The Cotter Dam (1915) would be a fresh supply of water. 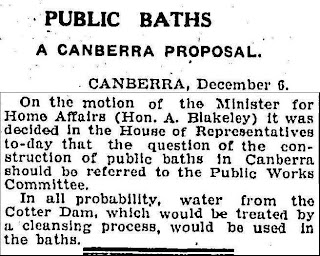 National library of Australia (here)
The Committee process continued for the next five months and finally a decision to proceed and the allocation of a 10,000 pound budget was suggested.
The Canberra Times - 14 May 1930 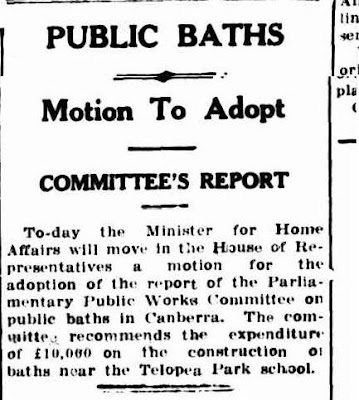 National Library of Australia (here)
The construction of Canberra's first 'public baths', originally known simply as "The Swimming Pool" was to be established on two hectares (4.5 acres) of land. Work commenced in July 1930 by "Sustenance Workers". These workers were unemployed men during the Great Depression (info) who were required to labour on government projects in order to receive sustenance (principally food rations). The 30 meter long swimming pool opened to the public on Christmas Day, however it did not officially open until Australia Day 1931. 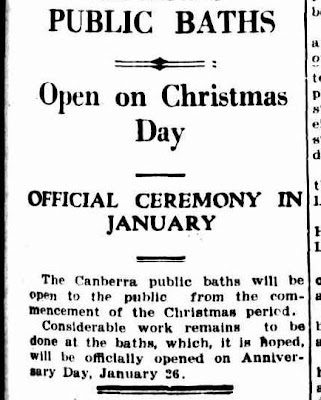 National Library of Australia (here)
The buildings were designed by Principal Architect E.H. Henderson in the Federal Art Deco style and were established with the facilities to accommodate 86 men and 41 women. The Australian Capital Territory's population was 9,000 at the time and these provisions were thought appropriate at the time. The decision to locate the public facility near Telopea Park (southside) was that the majority of housing, in the day, was located on the south side of the Molonglo River. 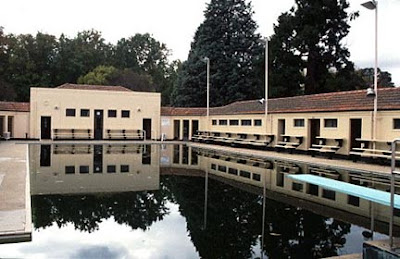 Within 5 years it became apparent that a mistake had been made when deciding the dimensions of the pool and it was found that a 30 meter pool was no longer adequate for competitive swimming. Although the club was being visited by Olympic standard competitors no records could be established because the pool did not conform to Olympic rules. The rules state that a swimmer may only turn once in 100 meters...
The Canberra Times - 29 June 1934

National Library of Australia (here)
The pool's various 'learn to swim' programs over the years were very successful with thousands of Canberran children taking their first strokes at the facility. Competitions were held regularly and the vibrant swimming club hosted competitions both locally and interstate, had many distinguished club members, interstate competitors and international visiting athletes. 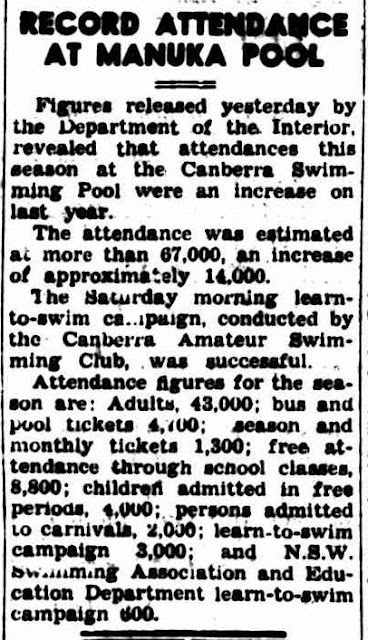 National Library of Australia (here)
For the public however, 20 years after opening the 20,000 strong and growing population of Canberra pushed the pool well beyond it's intended capacity. In 1949 the overcrowding of the baths and inadequate "cleansing plant" evoked descriptions of the pool as being "a distinct menace to the health of those who attended"...
The Canberra Times - 20 October 1949 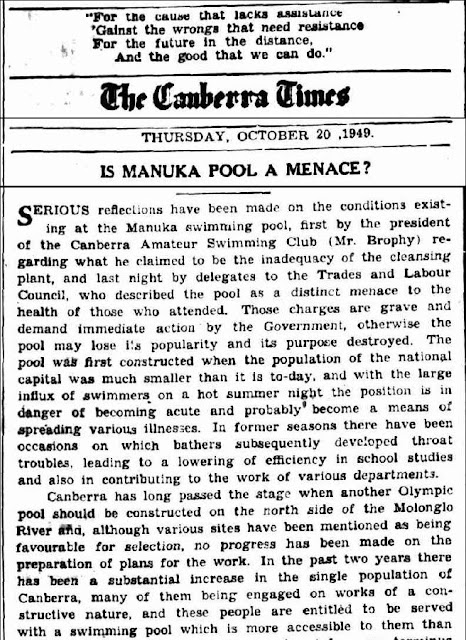 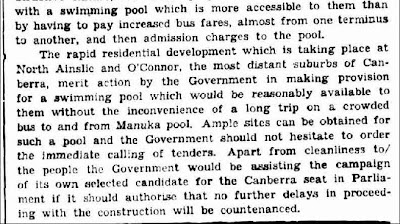 National library of Australia (here)
By 1952 it was at times impossible to swim...
The Canberra Times - 29 December 1952 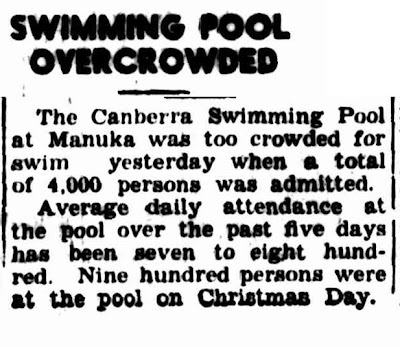 National Library of Australia (here)
The situation was alleviated the same year when proposed construction of a new Olympic standard swimming pool with 3 stage diving tower and pool was announced, and that it would be constructed before the end of the following summer. This allowed the now "Manuka" swimming pool to return to successfully servicing  a smaller community, as it has remained doing for the last 80 summers.
The Canberra Times - 28 February 1952 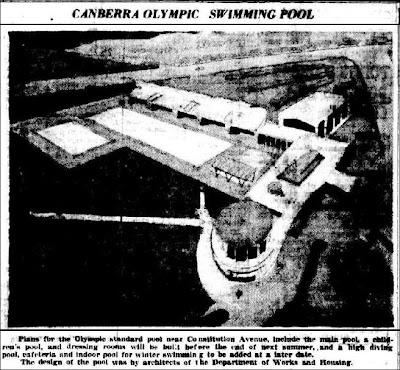 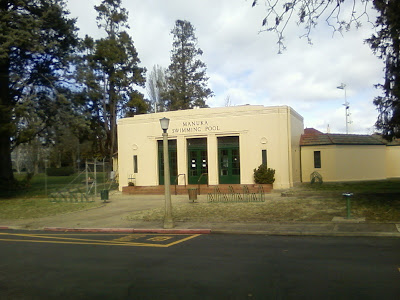