Europeans first settled the Mulligan's Flat area of today's Australian Capital Territory in the early 1820's. The old coach road to Bungendore (post here) passes through the flat and the area supported a small rural community. The Mulligan's Flat public school was built to educate the local resident's school aged children in 1886, by volunteer labour (most likely the parents). The small wooden 'slab' school house measured only 5' X 10'6" x 7' (1.5m X 3m X 2m), the walls were whitewashed, and the roof was made out of bark stripped from nearby trees. 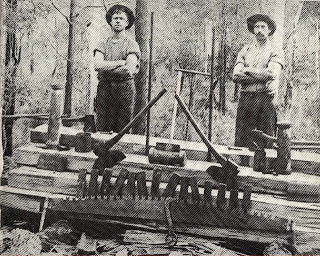 Slab cutters with tools of the trade
The little school operated for the next 17 years until it's deterioration warranted the erection of a more suitable structure in 1913. The 'old slab school' however remained in use as a lunch shelter. The new school was square 6m X 6M (20' X 20'), had a brick hearth and chimney, a corrugated iron roof, a water tank and an outhouse. 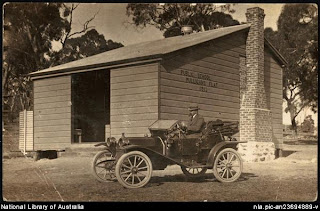 Shows a man at the wheel of an early model car parked
outside Mulligans Flat Public School.  Image NLA (here)
A fence was erected in 1919 and in 1920, to mark Arbour Day (info here) a double row of young pine trees from the new Yarralumla Nursery were planted by the students on the northern and western edges of the school house. 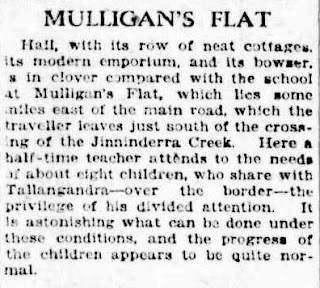 The Canberra Times - 25 November 1926
Clipping NLA (here)
The school was closed in 1931 because of falling attendance and the building was dismantled and removed in 1933. Today only the two rows of now mature pine trees, a few exotic plants and a sad pile of concrete rubble, the remainders of the school's steps, endure as a reminder of the Mulligan's Flat School's existence and history. 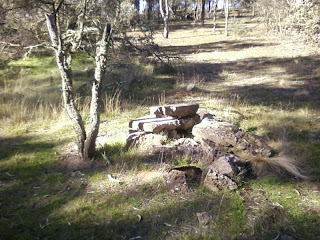 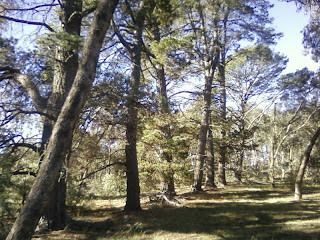 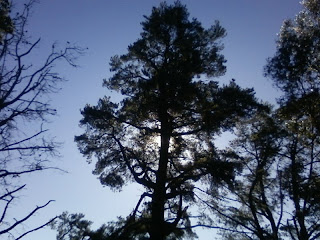