Following Australia's sacrifice of servicemen and their subsequent evacuation on the beaches of Gallipoli (info here)(World War I 1914-1918)-- Australia's first artist to be knighted, sculptor Sir Edgar Bertram Mackennal (1863-1931)(bio here) made a gift to the Australian public of a bronze bust of 'Bellona' the Roman Goddess of war, complete with a black marble pedestal. This was to be his tribute to the valor of Australian soldiers who served in the Great War. The gift was officially accepted by the Australian Government in 1916 and 'Bellona' arrived in Melbourne in 1920. 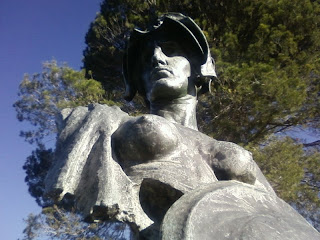 She arrived in Canberra in 1926, now aged 20, without her black marble pedestal (?) where she was loaned out by the Federal Government to the Federal Capital Commission for Canberra to await completion of the new Australian War Memorial. A locally made, poor quality concrete block pedestal was hastily erected to support Bellona and she then became the new National Capital of Australia's first sculpture. 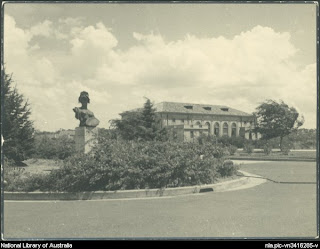 Bellona, or as the local Canberran's called her 'Boadicea' (British Goddess of War) was eventually located at the western end of Commonwealth Avenue Bridge outside the new Albert Hall (post here) where locals quickly accepted the bare-breasted, frowning goddess in a funny helmet in their everyday lives, as they passed back and forward on their travels. The politicians of Canberra however did not accept her so readily. Prime Minister James Scullin (1876-1953)(bio here) saw the sculpture as a 'glorification of war' and other members doubted her naked morality. 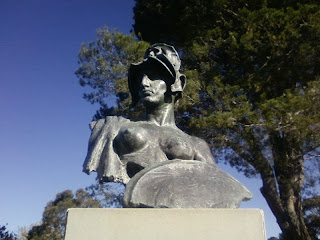 Prior to Queen Elizabeth's first Royal visit to Australia in 1954 (to avoid possible embarrassment from vandalism and/or decoration) she was moved to the Australian War Memorial. In 1969 Bellona was re-located outside of the Administration building in the Parliamentary Triangle suburb of Parkes, and moved again in the 1970's to sit (hidden away) watching Scrivener Dam in the grounds of 'Yarralumla', the Governor General's residence (post here). She was moved again to the grounds of the Australian War Memorial in 1981 and then moved again back to near her original position outside the Albert Hall in 1993. Bellona remained there until 1999 when she finally found a permanent home beneath the 'Lone Pine' pine tree (info here) in front of the Australian War Memorial. 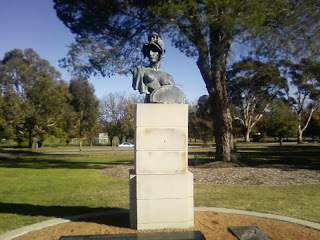 Over the years 'Bellona' the goddess of war has been embroiled in all sorts of controversy and has often been found with her breasts covered with brasseries, paint and other devised forms of coverings. Once she even had her breasts 'brasso' polished by pranksters to a high gleam.

Email ThisBlogThis!Share to TwitterShare to FacebookShare to Pinterest
Labels: monuments