The difficult thing about photographing Aboriginal scarred trees is their position on the tree in relation to the time of the day, and the position of the sun. This tree's scar wasn't a particularly helpful participant in relation to being recorded. 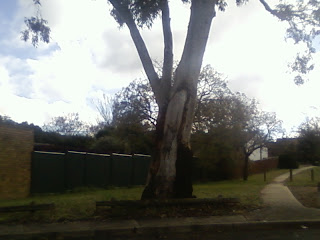 South side.
The large scar on the south side is approximately 3 meters (10 feet) long and the bark would probably have been used for a canoe or as a large sheet for shelter. The size and shape however would indicate a canoe. 400 meters away is another 'canoe tree' of approximately the same dimensions. The scar appears to be considerably old but despite the tree's attempt at 'healing' itself with a new covering of bark, all the distinct signs of deliberate removal of the bark to form it into a distinct shape are evident. As the age of the tree pre-dates European settlement of the area it is a fair assumption that the scars are aboriginal in origin. 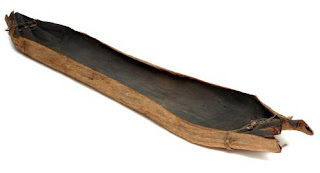 Aboriginal bark canoe (1938) made out of a sheet of bark folded and tied at the ends with plant-fibre string. The bow is folded to a point and the stern has a squared end. It measures 3m (9 feet) X  45 cm (18 inches). 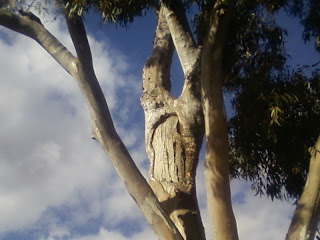 North side.
On the northern side of the tree about 4 meters up on a stout limb is another 1 meter (3 feet) scar. The scar made at this height was possible because other branches have provided a 'perch' for the stone-axe operator. The exposed heartwood of the tree now supports a large colony of native bees. The smaller sized scar is indicative of an Aboriginal 'coolamon'. (coolamons were traditionally used by Aboriginal women to carry water, fruits, seeds, nuts and to cradle babies. (Wikipedia  here) or a shield perhaps. 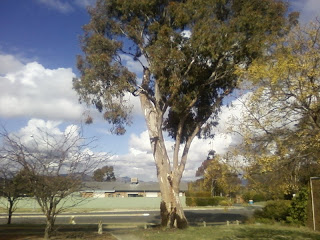 This collage of photos is an attempt to
show a close-up of the whole canoe scar.